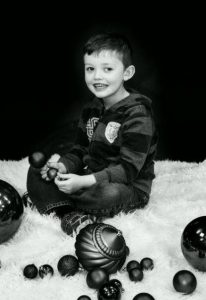 Occasionally, there comes a light that radiates and illuminates; a light that cannot be extinguished. That light is Evan Leversage of St. George, Ontario. On Sunday December 6th, Evan was released from his earthly body to shine brightly in the hearts of his family, friends and thousands around the world who came to know his story.

Some say he was an angel, placed here to remind us of the important things in life. How else can one explain the phenomenon that was Evan.

Evan James was born in Stratford, Ontario on September 14, 2008 to Nicole Wellwood and Travis Leversage. A curly haired, cherubic baby, his easy manner and endearing smile was evident right from the beginning. Just days before his second birthday, the diagnosis of an inoperable brain tumour destined that his journey on earth would be a brief and challenging one. 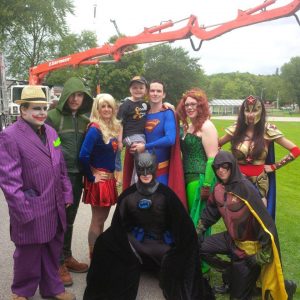 His time was to be fraught with medical appointments and hospital visits. He endured round after round of chemo and radiation with courage, patience and good humour. Otherwise, Evan was a typical little boy who loved Sponge Bob, Pokemon, Batman, Lady Gaga and practical jokes. He loved animals – horses, rabbits and especially dogs. He greatly loved having a big brother, Logan and a little brother, Tyson. He had a special affinity for big trucks and emergency vehicles and the people who drove them. He was so proud to have been made an Honourary Paramedic with Perth County EMS, an Honourary Fire Fighter with Brant County Fire Department and an Honourary Police Officer with the Brantford Police Department.

Not one to chatter away indiscriminately, he stole people’s hearts with his quirky sense of humour, his infectious giggle and his captivating smile.

The impact that Evan has had on the world in his seven years is further reaching and more enduring than most souls who get to stay here ten times as long. Without eloquent speeches, profound wisdom and doing anything more than being himself, he stirred hearts around the world. His quiet bravery, simple wishes and signature thumbs up, inspired caring strangers to reach out in love and support. He came to represent all children and families who struggle with health issues, especially childhood cancer.

The fulfillment of Evan’s ‘Bucket List’, which included ‘one last Christmas’ and the ensuing support of the community of St. George and far beyond, led to him becoming an international celebrity.

A letter from the Lieutenant Governor, Elizabeth Dodswell said … “Evan, thank you for being the Christmas Angel the world needs now.” He was. He is. His light shines on brilliantly. It is the light of kindness, of compassion and generosity. It radiates the very best in humanity. It is a steady, gentle light that illuminates the shadows of a harsher world. His is an eternal light. It is the light of love that shone to him and through him.

Here to carry on the legacy is his mother, Nicole Wellwood; his father, Travis Leversage (Mia Tatai) and brothers, Logan and Tyson. Cherishing his memory are grandparents; Linda Wellwood and Lyle MacArthur of St. George, Jim and Tammy Leversage of Embro and great-grandparents, Ron and Ruth Smith of Barrie, Mabel Regan of Embro and great-great grandmother Ethel Smith of Creemore. Greeting him in Heaven with open arms is his grandpa Harold Jr. (Buddy) Wellwood. Also loving and missing him greatly are a whole lot of aunts, uncles and cousins. Evan was blessed to have many superheros in his life, especially the physicians and nurses from Children’s Hospital in London and McMaster Hospital in Hamilton. The good folk with Childcan in London and Stedman Community Hospice, Hankinson House in Brantford were also a valued and important part of his journey. The many, many friends, new and old, whom he has inspired, will forever hold Evan in their hearts.

Evan’s legacy is one of hope. Hope that other children who are on his path are not short changed of a full and rich life. Hope that other families do not have to go through such pain and suffering and say good bye to their children. Hope that love always shines the brightest.

"To the world he was just a part. To me he was all the world" Evan, was more than just the "Boy who moved Christmas."

He was robbed of his life. Evan's Legacy is about giving children the fighting chance that Evan never had. It a Legacy of Love, Hope, Inspiration, giving back, helping those in need.

As Evan's mom I made a promise before he passed. That I would continue his fight. I will until my dying breath keep fighting for children like Evan. Become Aware. Childhood Cancer is the leading cause of death in children. Lack of funding. Lack of research. Lack or awareness. This is real. A bond NEVER broken.